The capital of the Amhara Regional State, Bahir Dar is a growing regional center founded on a relatively flat area on the southern shore of Lake Tana, the largest lake in Ethiopia, which is the source of the Blue Nile. From a security perspective Bahir Dar is considered a safe area to operate, because of its political stability in the region. The area of the city is 62.22 square km with estimated population of around 412,189 in the city core area and 240,939 in the surrounding rural settlements. The population of Bahir Dar is not exactly known may be above what it is estimated above.

Bahir Dar water supply comes from 3 springs and 20 deep wells. Service coverage is estimated around 60%. Water shortage is one of the most critical problems of water supply in Bahir Dar. Drinking water is not consistently supplied within the city. The data shows that the current per capita consumption of less than 42 liter per capita per day is still below the WHO minimum (50 l/c/d). The most vulnerable people like children, older and disabled persons, and the poor are affected by unavailability of water. Currently most of the water supplied does not generate revenue. Improving the operational performance can unlock revenues, which can subsequently be used for further improvement of services creating a virtues circle. 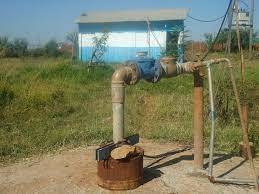