Robbert van der Bij, RPM in Colombia, talks in the newspaper 'Diarrio del Huila' about his work in Neiva - Colombia. Here you'll find the translation of the article:

Netherlands recognize work in aquaduct and sewage system of Neiva

The settlement Brisas del Venado will be the first beneficiary where the mission of the Netherlands approved resources for 90 thousand Euros ($ 320 million) for the improvement of basic networks and micro measurement.

At the end of 2017, Las Ceibas became one of the first five Colombian companies to complete the Aquarating self-assessment process, an international standard led by the Inter-American Development Bank (IDB), which allows water and sanitation operators throughout the world, know the quality of the service they offer.

The platform is accepted and endorsed by the IWA (International Water Association, for its acronym in English), which from Holland ensures a sustainable management of water resources in cities.

As part of aquarating, the Ceibas could be measured with international criteria and identify their main weaknesses and strengthen in 8 fundamental areas for the water and basic sanitation sector, explained Deicy Martina Cabrera Ochoa, planning head of Las Ceibas.

This placed the company on the international stage as it was also included in the cooperation project for the improvement of water and sanitation providers of Colombia COMPASS, of the IDB, financed by AguaFund and the Secretary of State for Economic Affairs of Switzerland (SECO), from whom Las Ceibas obtained support for the formulation of the company's Strategic Plan for ten years (2018-2028) and the financing and implementation of a 3-year technical proposal.

For this proposal, Compass allocated resources for $ 2.6 billion pesos, represented in 8 consultancies that the IDB is directly hiring in topics such as corporate governance, human resources, investment prioritization, among others, according to the needs identified in the diagnosis of the utility company.

In three years Las Ceibas must be reassessed in the Aquarating indicators and measure whether we have improved in the 8 defined areas. If so, we will be certified with international standards exclusive to the drinking water sector, explained Cabrera Ochoa.

The compliance of the entity called the attention of the WaterWorX program, the Ministry of Foreign Affairs, the Ministry of Infrastructure and the Embassy of the Netherlands, which are the financing of the Dutch Water Company (VEi), seeks to connect in a sustainable way 10 million people around the world to drink water.

The entity is one of the three Colombian companies in this program. In Neiva WaterWorX seeks not only to connect more people formally to drinking water, but also to strengthen the company's ability to invest in the operation itself and, among other aspects, improve the rates of Non Revenue Water, through a pilot plan, with actions such as the systematic search for leaks, inventory of assets, measuring instruments, analysis of billing, production and other activities required to find a solution to the losses of water that are generated in the company's distribution network.

For his part, Robbert van der Bij, representative of WaterWorX in Colombia, said he is satisfied with the path that the entity is taking, there is a well-organized public services company, on a very good road, there are many challenges and we have confidence in the company leadership and the people we have met, he said.

The Dutch water companies have an additional program called Water For Life, which is financed with voluntary contributions from the subscribers of the aquaduct service and seeks to support the most vulnerable sectors.

The public company of Neiva seeks to contribute to the improvement of the quality of life of those who live in the settlements of the city and seeking a solution to the loss of water, presented a project that covered several settlements and began with Brisas del Venado. In addition to the support of experts, trainings and the mission to Holland, resources were approved for 90,000 Euros (approximately 320 million pesos) for the improvement of basic networks and micro measurement for settlements in the subsectors of the City Pilot Plan, explained the head of planning. 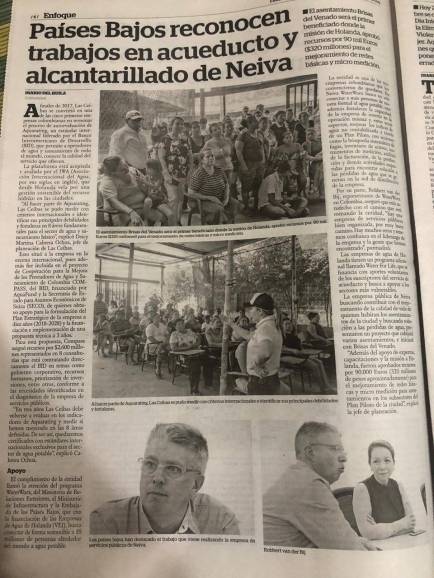